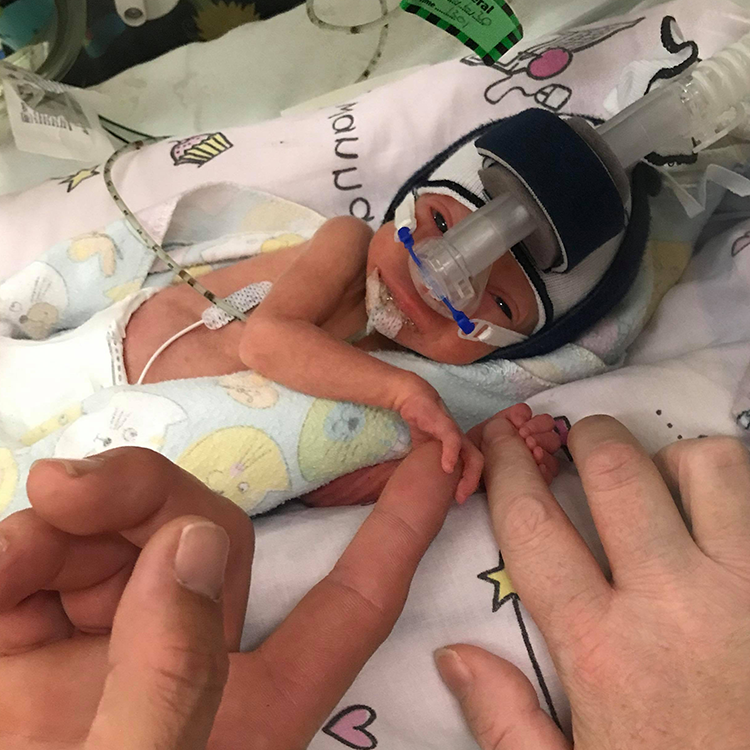 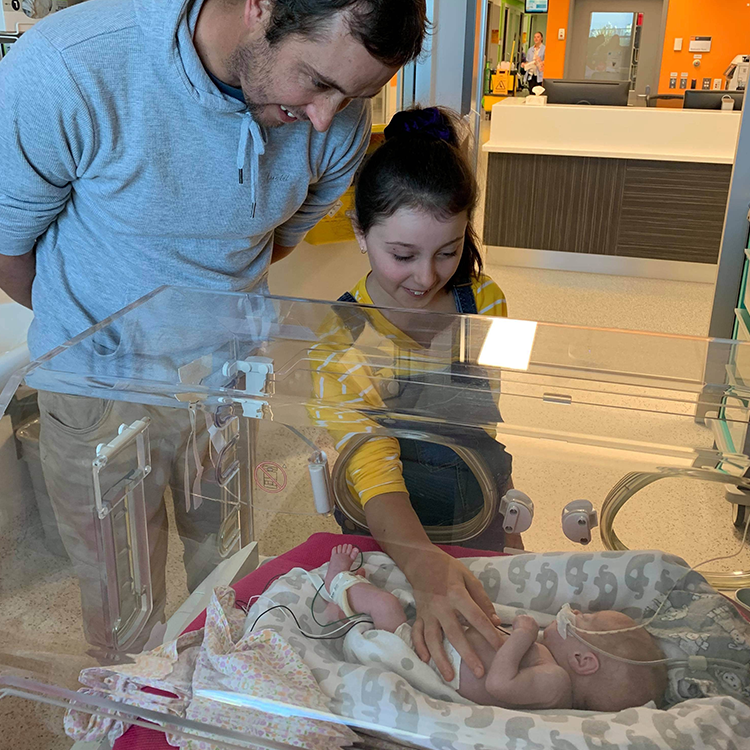 "Our first daughter, Emma was born in 2010 at 30+3 weeks, weighing 1150 grams due to pre-eclampsia.
I had hoped almost 10 years later I would make it a lot further along and had extra medications, ultrasounds, tests etc.

From around 23 weeks I had a few of hospital stays with high blood pressure but adjusted my medication and kept it under control. I was having ultrasounds roughly every four weeks. I had an ultrasound at 25 weeks and baby was measuring perfectly.
At 29+1 I had an ultrasound which showed baby had IUGR and was measuring two weeks behind, and had restrictions with the placenta. I burst into tears knowing what was ahead. My obstetrician immediately sent me to Gold Coast University Hospital instead of Tweed Heads Hospital. I had the steroids and magnesium sulphate straight away. My blood pressure was increasing and I was diagnosed again with pre-eclampsia.

The obstetrics team's goal was to keep the baby in for a minimum of 48 hours to allow the steroids to kick in.
By 29+3 I was on labetalol, nifedipine and hydralazine (intravenously) to try and get my blood pressure down; plus up to about five bags of magnesium sulphate by now. I had no symptoms of pre-eclampsia until now, when my hands puffed up like a balloon and baby’s movements were starting to slow. Baby had a series of heart rate drops one lasting 3 1/2 minutes.

The morning of 29+4, my nurse woke me in the morning as my blood pressure was 180/100. It was increasing quickly even with all the drugs. I switched off - knowing delivery wouldn’t be too far away but I remember one being 215/110.

The team made a decision for an emergency caesarean and within half an hour baby Isla arrived at 10.54am weighing 930 grams. She didn’t come out crying straight away, but did after a couple of minutes. I was hoping she would be 1kg as the latest ultrasound estimated 1024 grams, but as soon as I saw her I knew she was a lot smaller than Emma.

My partner went straight to the NICU, I went to recovery, then back to my room. I immediately started to express milk and wasn’t able to go see her, due to my blood pressure, until 6am the following morning. I was somewhat okay with this as I just wanted to focus on getting milk to her and getting my blood pressure under control as soon as possible. After having a 30 weeker I knew what would have been going on and the long journey ahead. My partner was going up all the time and giving me updates and photos.

At a month old, Gold Coast University Hospital relaxed some COVID restrictions and our nine-year-old was able to meet her sister. We knew Isla would soon be transferred to Tweed Heads Hospital, where restrictions of parents only were in place and likely to be kept that way. I am so thankful for this time as I thought Emma would have had to wait until Isla's due date to meet.

At 35 weeks Isla's apnoeas had slowed and she was well enough to be transferred to Tweed Heads Hospital. After 73 days Isla came home on her due date weighing 2.8kg.

Isla had a pretty normal NICU/SCN journey for a baby of this gestation and size. She endured food intolerances, a brain bleed, ROP, blood in her stomach, jaundice, constant low haemoglobin (somehow just avoiding a transfusion), distended tummy (constant fear of NEC), refusal of breastfeeding and bottle feeding (still struggling on the day we left, but improved after a couple of weeks at home), apnoeas, constant brady’s and desats up until 38 weeks and a heart murmur (fear of PDA - ended up an innocent heart murmur). Isla was on CPAP for two weeks and had a two day break before going on high flow for two weeks.

I am forever grateful for all the health care Isla and I received. The doctors and nurses were all so amazing and became like family. Having a premature baby is hard to understand until you have gone through it. I thought because I’d done the journey before I would be fine but the reality is it is still just as stressful leaving your baby behind and going on the roller coaster ride for the next couple of months. I also had the added issue of COVID restrictions and crossing the border everyday. I was fortunate my mum flew in and stayed for three months to look after Emma so I could focus on Isla, but I still found it hard to balance my time between my two girls. I appreciated all the support and well wishes from all of our family and friends.

Every family has a different journey and no baby is the same. The journey is full of highs and lows. We all tell ourselves one step forward two steps back. But the day when you get to take your baby home makes all the stressful and emotional times all worth it." 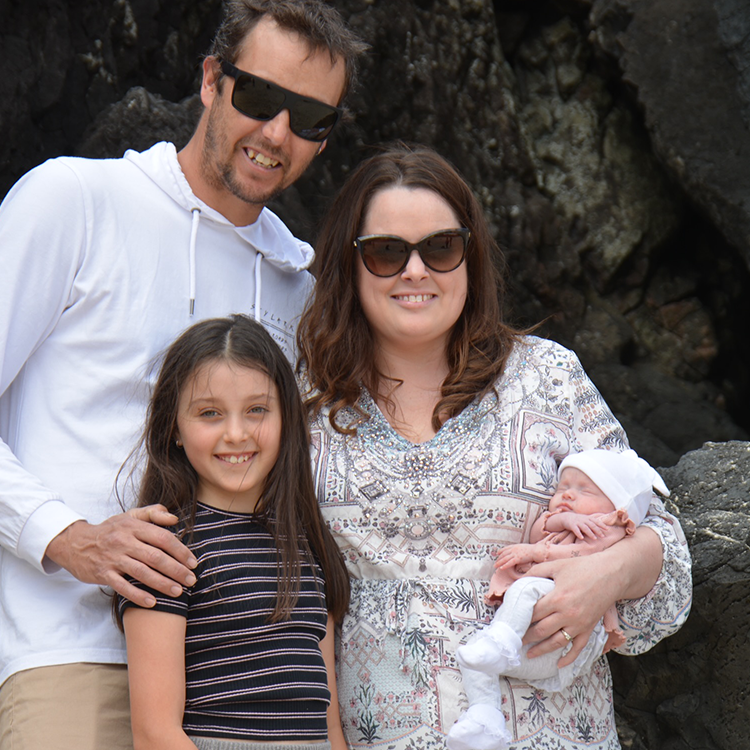