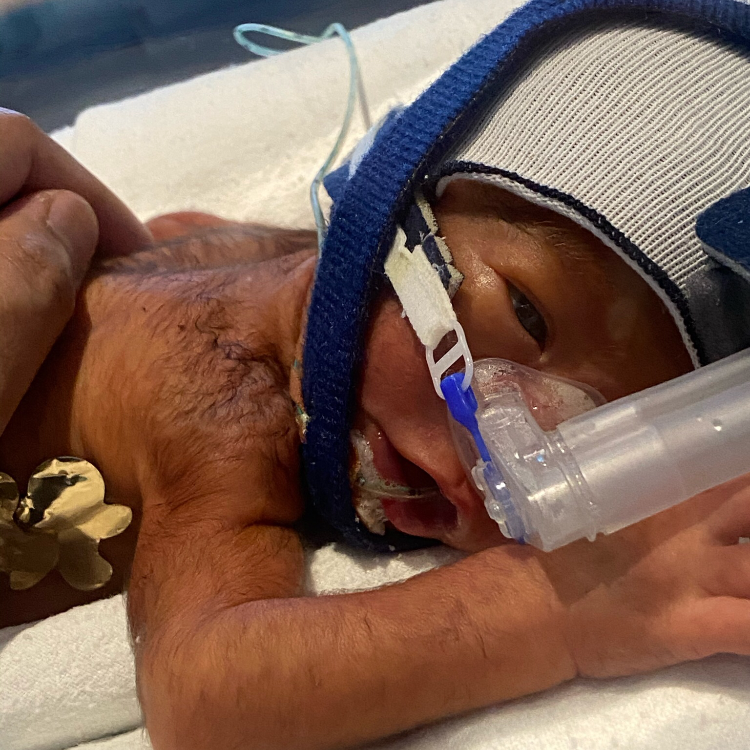 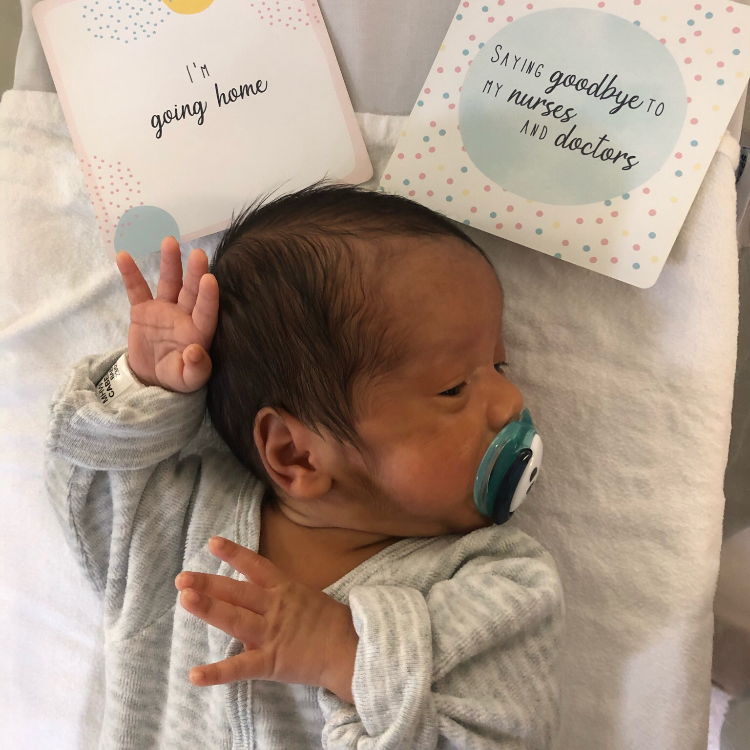 “We always knew our pregnancy would be high risk. It took more than 4 years for us to pass the first trimester in our pregnancies. Unfortunately, we had three rainbow baby boys over this time, but Leonardo (Leo) was our little fighter.

One warm night, my husband Kevin and I went for a short walk. I was feeling really tight in the belly and was only 28 weeks gestation at this point, so didn’t think too much of it.

I went to go wash up and felt something “leak”! At first, I thought I was bleeding again, as I had several bleeds during this pregnancy, but that wasn’t the case. So I took a shower and went to relax on the couch but it happened again, this time it was a bigger “leak”…. I didn’t think anything of it as I wasn’t in any pain but my husband suggested I call our obstetrician, Dr Hong to double check. She told me to immediately make my way to her rooms, so they could eliminate the possibility of my water breaking.

Kevin and I were quite calm. I didn’t pack a bag or anything really. At this point the baby’s nursery was still in boxes or being delivered, I didn’t have any baby clothes or essentials ready but that didn’t matter as long as the baby was fine, the rest would fall in place. We were excited and nervous at the same time.

After some tests, the nurses confirmed weak signs that my water could have broken. I stayed overnight at the Epworth Freemasons, where I was supposed to deliver in April 2021.

Epworth Freemasons could only deliver babies post 32 weeks gestation, so the following morning Dr Hong confirmed my water had broken, but I wasn’t in labour and made arrangements to have me transferred to the Mercy Hospital for Women via ambulance. I would have to spend the rest of the pregnancy in hospital, and Dr Hong would no longer be able to deliver our baby as we had intended. Regardless, she stayed in constant communication with me and the hospital directly to assist where possible.

The first night at went without a hitch, up until the late evening when another newborn and his mum were settling into the bed next to me. I was conflicted, happy for her, but at the same time anxious because we didn’t know what or when we would deliver and if there would be any complications.

Later the second night, all hell broke loose, and I had a massive “leak”, my water had almost completely broke. I was taken down to the birthing suites and my husband came straight into the hospital. We spent 8 or more hours in the birth suites, while doctors monitored the baby and my condition. At one point, the doctor came rushing in to advise they were preparing me for an emergency Caesarian as Leo’s heart rate had dropped and wasn’t steady.

No more than 45mins later, after being prepped for surgery and taking in a world of info from NICU, he came back in and said they would hold off surgery as Leo’s heart rate had picked up. The baby would have a better chance the longer he stayed inside, as long as there were no complications.

Many tests and monitoring followed, the nurses at the Mercy were fantastic! Ten days later, Leo’s heart rate dropped significantly and so too did my blood pressure. After much discussion, the obstetrician decided the best option was to undertake an emergency Ceasar, as they thought there could be an infection.

Leo was born at 12:31am on Saturday 23 January, weighing 1.03kg. We were overjoyed! It brings tears to my eyes thinking about the moment he arrived - the relief that he was out, and in good care with a team of 5 or so specialists on hand when he came out!

Leo had some breathing complications but was in fantastic care at the Mercy NICU. He spent two months in NICU, working through the stages, moving off CPAP after 4weeks, then onto high-flow for some weeks. After 2months and several attempts to move down to low-flow, he finally succeeded and was moved to Special Care Nursery (SCN).

COVID restrictions still applied, and only one parent could be inside NICU/SCN at a time. That was extremely difficult, especially when you had a difficult day or were told some distressing news on Leo’s condition. We missed sharing so many firsts, bathing our son for the first time together, putting on his first set of clothes, feeding him his first bottle…. Moments we lived through photos and stories which Kevin and I told each other after each visit.

Although Leo wasn’t sick, he still endured his own challenges, spending several weeks under the UV light, as he was jaundiced as well as low iron, calcium and vitamin D and we still are monitoring these levels.

During this time in NICU, we met some of the other parents and their babies working through NICU down to special care. I became particularly close with four other first time mums, what an experience we shared. It was really comforting seeing them during the day at the hospital and vent or share our stories. It was a great network, emotionally and mentally, I’m so grateful to have had their support. Since then, we’ve kept in touch and constantly share photos of our babies, it’s incredible to see them come so far! One of the mums even organised our team for this special fundraiser, a great way for us to give back - Mercy Mummas!

It came to a point in late February, when we were given the option to transfer to NorthPark Private Hospital, as long as Leo passed his next test to come off low-flow completely then we were good for the transfer.

Leo did brilliantly on his test and we were getting ready to be transferred which meant he was one step closer to being home. During his discharge examination, the doctors noticed Leo had an Inguinal Hernia, so he would need to be referred to the Royal Children’s Hospital to undergo surgery, which took place a week after he was discharged from NorthPark Private.

Leo spent just over a week at NorthPark Private Hospital and was discharged at the end of March 2021. We were overwhelmed with joy, that we could finally bring our baby boy home. Those first few months were amazing but also stressful, sleepless nights, checking that he was breathing.

Since then, Leo’s progressed so much, we can hardly believe he will be 1 years old in just a couple weeks. He is an absolute delight and brings so much love and joy to our lives every day. We are so proud to be Leo’s parents and we would do it all over again in a heartbeat”. 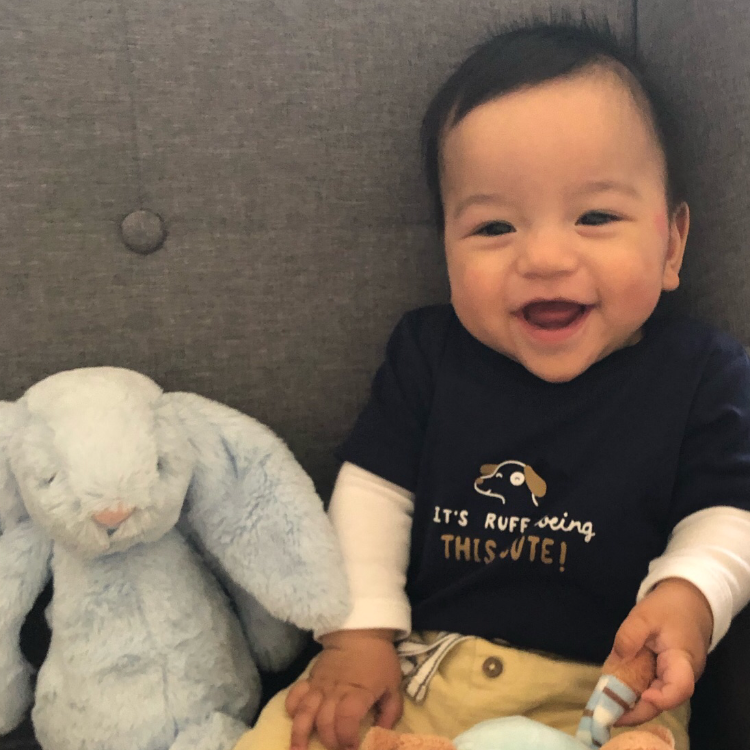