When a family travels the difficult journey of welcoming a premature or sick baby into the world, it isn't just the parents or carers who are impacted.

The whole family feels the reality and shares in the emotions of the experience. None more so than grandparents. Grandparents are often an invisible casualty when a birth does not go to plan and ends in an emergency delivery and admission to the NICU. Grandparents are part of a common phenomenon where there's a double concern for both the newborn grandchild, and their adult child who is managing this stressful event physically, mentally, and emotionally.

While Grandparents are the most common support system for new parents, the hospital restrictions and fragile health of an NICU baby can create an imbalance of involvement and un-involvement, which is often difficult to avoid. Hence, grandparents may require great flexibility to help in other ways.

One common way to help is in the home, attending to the needs of the siblings, and supporting the family’s routine which is a huge and much-needed help. During this time grandparents provide new parents the opportunity to be with their baby and to also be part of the healthcare team. In a way, they become the scaffolding for parents to be in this very important position for the best outcome for their grandchild.

It’s important to also acknowledge the challenges for grandparents of babies in the hospital during COVID-19 who would have no involvement in the NICU and for some, possibly meeting this new baby for the first-time months later, once discharged. The restrictions that are put into place are there to protect the fragile health of the baby as well as protecting this particular age group from entering a building where patients are being treated for the COVID-19 virus. All of those feelings of fear, worry, and uncertainty are shared by the new parents and extended family, however grandparents are unique and medical staff should understand and welcome them in their supportive presence. They are the unsung heroes of this life-changing event.

We are looking for stories from a grandparents perspective, sharing your experience of having a grandchild in NICU or SCN and watching your own child navigate the challenges of such a journey. If you would like to share your story click HERE.

A Nan's journey with a Miracle baby

Proud Grandparent, Diane shares her story of trying to navigate the premature baby experience by supporting her daughter-in-law Samantha and son Terry, whilst also caring for her other grandchildren and worrying about the newborn Willow in the NICU.

"Sam is like my other daughter we are in touch daily. In hindsight she was concerned with this pregnancy from the start. Nothing tangible just a feeling she had.

She was not feeling great on December 16 and had been complaining about sore legs on and off when I spoke to her early in the evening.  I had just returned to work as we had lost mum on the 4th of December and at this time was still working full time.  I went to bed late around 12pm so was quite startled when the phone rang around 3.30am. Sammy was crying, she was losing blood and was scared. I told her to hang up and ring the ambulance, and I headed to her house. By the time I got there the ambulance was leaving with her on board to the hospital. We packed up Lilly my granddaughter who was nearly two years old and headed straight to hospital. I had been with Sam for the births of her two other children.

Things were very surreal and I can remember the medical team examining her and then advising that the baby was coming and they were going to move her to a suite. They were administering steroids and advised they would just monitor as long as possible in the hope that they could at least stabilise her for 12 hours to get the full dose of steroids to give her baby the best chance to survive. I couldn’t help but think that 24 weeks was too early and I felt that I had been punched in the gut.

Sammy and Terry, my son were in shock and I was their support in the delivery rooms for their other children, and this time support was definitely needed but by all of us. I was back and forth between the delivery suite and the waiting area and things were touch and go for Miss Willow.

Pete my husband followed us to the hospital to help with Lilly who is a very active child to say the least until we could drop Lilly off to day care, as it was luckily her day to attend.

Shortly after Pete and I left to drop Lilly off, they took Sam to theatre for an emergency C section. When I arrived back at the hospital, just over an hour later to find out she was in theatre and had delivered a little girl 24 weeks to the day weighing 612 grams. She was breathing but was in difficulty and being transported to the Neonatal ICU (NICU).

This wasn’t the first time that I had seen a premmie baby but she was the youngest and smallest little thing I had ever seen.  One of my daughter’s children was born 11 weeks early. I lived interstate and although we visited to see him in the NICU, we were not living close enough and certainly did not realise or experience the struggle that she or parents with miracle babies  go through first hand.

I took a leave of absence and moved in with the kids for the first six weeks, I became a substitute mum and helped at home as she had the 2-year-old and two twelve-year-old girls at home. For the first six weeks she was unable to drive and we were all attending the hospital every day. As she healed I would look after the girls at home and visited the hospital at my own at times. I saw Miss Willow nearly every day throughout the first 3 months. However, we were unable to visit her for the last month due to the COVID-19 restrictions.

This whole experience has been an emotional roller coaster.  I am usually a positive person, however this tested me. I have always believed that for every bad thing in a day there was a positive if you looked for one. The littlest achievements were monumental celebrations: hitting the 1 kilo mark, her little eyes opening, no IV’s.

I had tried to stay positive and keep her mum and dad positive right down to the moment where we had a meeting with the Unit director and he advised us that there was only so much they could do and that they didn’t have much more wiggle room with what they could do for her because she was not breathing on her own. It was then the realisation that we may have to let her go if there was no improvement, hit us. I’ve got to say that even though the signs were there and we were all aware of the struggle that was going on - that was the moment that broke me.

I can remember Sam looking at me and saying 'if you tell me to be positive right now I will punch you in the face'… we do laugh at this now, however it was hard to see any positive and the thought of saying goodbye to our little angel was inconceivable.

But Miss Willow was not having any of that and she turned it all around and she fought through it, surprising everyone including her doctors.

Just over five months on she is home now, still on oxygen, but doing well. I am no longer working and am still helping out when needed.

As a parent I have to say that my children amaze me with their resilience and their ability to cope as I do not know how I would have done so. I am extremely proud to be the Nan to Willow, our miracle baby and my other 10 amazing grandchildren and 1 great grandchild. Sharing this experience has brought us all closer together as a family.

My admiration goes out to all the staff of the Gold Coast Hospital NICU and to all the mums, dads and families that share the experience of having a Miracle baby."

Grandparent relationships are diverse and come in many different forms across Australia. Grandparents, grand-friends, kin, and those who take on the role of a grandparent in their family are often a great source of support for Miracle families facing these challenges.

To honour and celebrate the grandparents in our lives, Miracle babies Foundation is launching the 'Proud Grandparent's Project'.

The project will work to recognise the amazing role grandparents have in this journey whilst also acknowledging the difficulties grandparents may face, including isolation, fear, helplessness, anxiety, detachment, confusion, and even conflict.

Soon there will be several ways you can support the Proud Grandparent’s Project, whether you’re a grandparent yourself, or in honour of a grandparent, including donating and being able to sponsor a special gift to be given to Miracle families in the NICU/SCN that a parent, carer or grandparent can enjoy with the baby/their grandchild.

But for now, we want to hear your grandparent stories to include them in our Proud Grandparent's Project.

Help other families going through a similar journey and let them know they aren't alone. 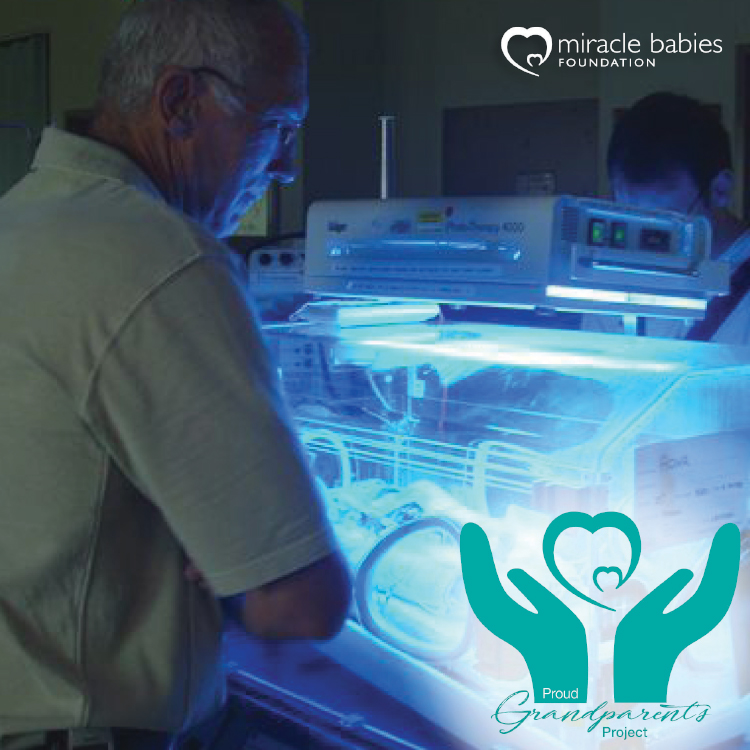 Thank you to the special Grandparents of our miracles, they need our support too 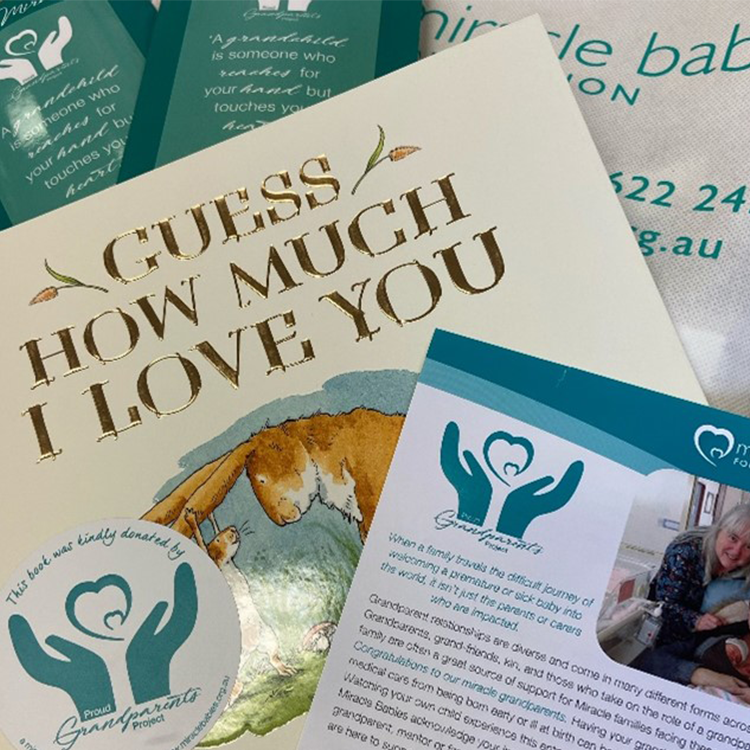 NEW Grandparents support resources to be distributed to hospitals