"I found out I was pregnant on New Year’s Day; it was exciting and nervous all at the same time. At eight weeks pregnant, my blood pressure spiked. My GP consulted with King Edward Memorial Hospital and I was put on medication to bring my blood pressure back under control.

From 28 weeks to 30 weeks, it felt like I was at the maternal unit everyday with high blood pressure and having constant blood tests. They started doing nearly weekly ultrasounds from 26 weeks as my baby had started measuring smaller than her gestation. 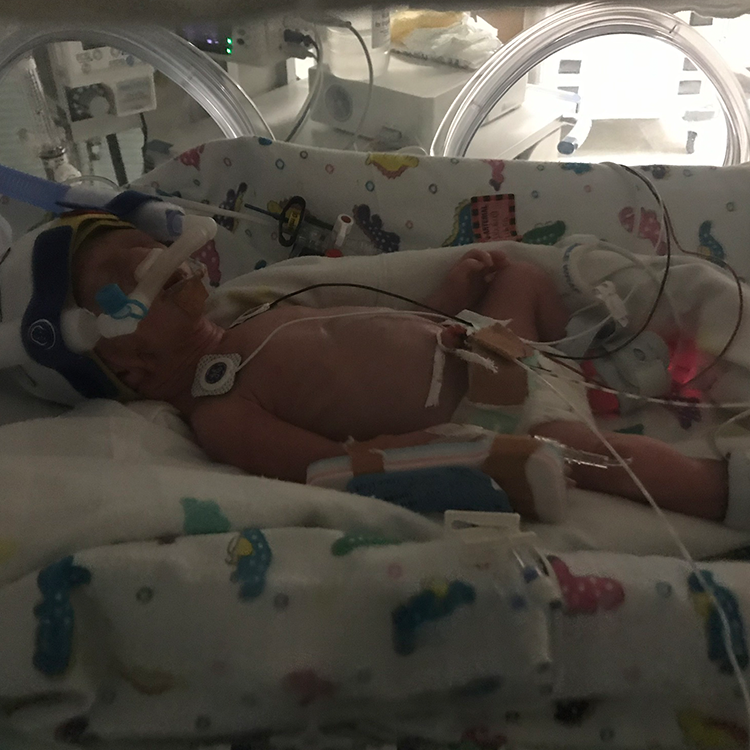 I was transferred up to the maternal unit, which I was very familiar with. They ran blood tests and pumped me full of blood pressure medication. My protein had come back at 28 and for a pre-eclampsia diagnosis the proteins needed to be at 30. I was admitted into Fiona Stanley with gestational hypertension.

That night, I developed severe liver pains, which was brought under control. I was awoken at midnight with steroid shots, but given no explanation other than “this is just in case bub comes early”. 8am rolls around, the nurse came into my room and tells me that my blood pressure is still high but controlled and that I’d get to go home that morning. I rang my husband and said they’re sending me home, he was downstairs in the car park. By the time my husband made it from the car park to my hospital room I was surrounded by doctors and specialists. It turned out my proteins had sky rocketed within a couple of hours. About an hour later I was transferred to the labour ward and informed that my baby needed to be delivered that day.

I shut down emotionally and was not able to cope with what I was being told. No, I was only 30 weeks, my baby wasn’t ready to come yet. We were given the option of being induced or having a c-section. The doctor went away and came back shortly after. We opted for the induction, this is when the doctor told me that induction could take 48 hours and didn’t believe I had 24 hours. My husband stepped out of the room and the doctor said to him that I needed to have the emergency c-section. Basically, that he had to choose me or our baby. My husband came back into the room and said you need to have the c-section, so I signed the papers and off to theatre we went.

My beautiful baby girl was born at 2:14pm weighing 1.26kgs. She was rushed to the NICU and I was sent to ICU. Unknown to me at the time, but I had not only developed pre-eclampsia but I had also developed HELLP syndrome and my liver and kidneys were shutting down.

I was unable to see my baby girl until 11pm the next night. This was the start of our eight week NICU journey. Our NICU journey was one step forward and two steps backward; and even though we thought we would never get to take our beautiful baby home, that magical day eventually came around.

Our little baby is not so little now and is now 12 months corrected. She is the most amazing cheeky little girl we know. We still attend the Miracle Babies playgroup every fortnight and are extremely grateful for the support that Miracle Babies provided from the beginning and still provide today."