Every year in Australia around 48,000 newborn babies require the help of a NICU or SCN, there are many factors linked to premature birth and also many that remain unexplained. Some may cause early labour and delivery, while others may compromise a mother’s or baby’s health and require an early delivery. The following factors may contribute to a premature birth.

Cervical incompetence: occurs when a weak cervix cannot support the weight of the uterus and begins to dilate (widen) and efface (thin) before pregnancy has reached term. Women diagnosed with an incompetent cervix may undergo a procedure in early stages of pregnancy called a Cerclage. This involves placing a stitch in the cervix to prevent it opening up too soon and removing the stitch when nearing term.

HELLP Syndrome: a life-threatening obstetric complication considered by many to be a variant of pre-eclampsia. HELLP is an abbreviation of: Hemolytic anemia, Elevated Liver enzymes, and Low Platelet count and relates to high blood pressure during pregnancy.

Multiple births: occurs when more than one fetus is carried to term in a single pregnancy. Twins and other multiple births are often induced early if labour is not spontaneous. Around 50% of twin pregnancies will be born before 37 weeks and a very high percentage of higher order multiples will be born prematurely.

Placenta Previa: a complication of pregnancy where the placenta has attached to the uterine wall close to or over the cervix opening. Placenta Previa can cause bleeding, and an increased risk of slow fetal growth and premature birth.

Placental abruption: a complication of pregnancy, where the placental lining separates from the uterus of the mother. It is the most common cause of late pregnancy bleeding and depending on the degree of separation is a contributor to fetal and maternal mortality. Direct trauma to the uterus is a known cause and risk factors may be multiple pregnancy, smoking and high blood pressure.

Placental insufficiency: this condition can prevent the baby from gaining essential nourishment. Symptoms may include below average weight gain, below average fetal development, or slow growth of the uterus. An ultrasound examination will determine if growth of the fetus is adequate and doctors may advise early delivery if necessary.

Pre-eclampsia: acomplication of pregnancy where hypertension arises in conjunction with high levels of protein in the urine after the 20th week of pregnancy. Pre-eclampsia is the most common of the dangerous pregnancy complications and can affect both mother and baby.

Premature Rupture of Membranes (PROM): acondition which occurs in pregnancy when the amniotic sac spontaneously ruptures before the onset of labor. There may be no known cause or it could be related to an infection.

Previous premature birth: women who have had a premature delivery previously have an increased chance of having another pre-term delivery.

Serious or an existing medical condition: conditions such as rhesus negative blood group, gestational diabetes, diabetes, kidney disease and high blood pressure can all affect a developing baby. In some cases, the decision to deliver a baby prematurely is because either they or the mother are medically unwell due to a health problem, congenital abnormality or surgical need.

Twin-to-Twin Transfusion Syndrome (TTTS): a complication where two or more fetuses share a common placenta and associated with high morbidity and mortality.

Urine infection: sometimes during the middle to later months of a pregnancy a serious uterine infection can trigger preterm labour. It is important that any possible urine infection be brought to the attention of your health care professional.

Uterine abnormalities: women with an abnormally shaped uterus such as a bicornuate uterus could be at risk of pre-term labour. The baby may have less room to grow and when there isn’t enough room for the baby, the stretching of the uterus can cause labour to begin.

You can access Miracle Babies support through NurtureConnect, by calling our 24 hour family support helpline; NurtureLine 1300 622 243 or joining our Facebook community. 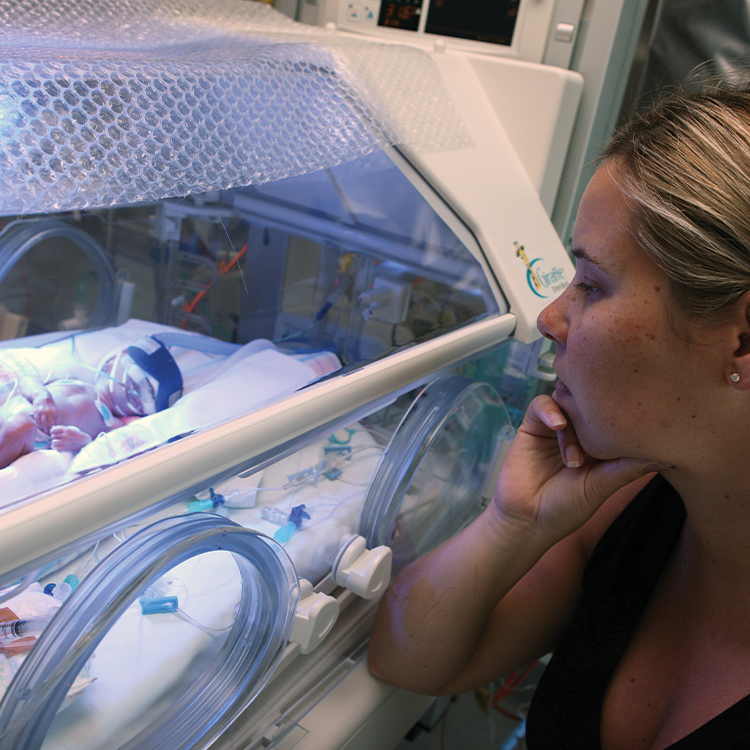