As a new dad, you will experience a range of emotions surrounding the birth of your baby. If your baby or partner requires ongoing medical care, you may find the experience a little overwhelming, as it is not how you envisioned fatherhood to be.

The birth of a premature or sick newborn can be especially hard for dads. You may be intensely worried about your baby and partner, and feel frustrated and helpless that you can’t do more, while also trying to juggle work commitments and perhaps looking after other children at home.

Men often carry their fears and concerns on their own. Do not be afraid to ask questions, show your emotions or ask for help. It can be tough, but you are not alone. Family, friends, nursing staff and even your GP can assist if you find that things are getting too difficult to cope on your own.

It is helpful to remember that you are a very important part of the team contributing to the care of your baby and there are many ways in which you can be involved.

“It was overwhelming having a baby in intensive care. I wondered if I really understood what was happening, what was it I should be doing or how was I meant to feel? For me it was so far from what was meant to be the 'norm'. Over the months of watching this tiny person grow things slowly settled down. Through the challenges and hard news, we saw our son slowly reach the stage when we could take him home.” - Anthony, Miracle Dad to Caden born at 29 weeks and Eli at 25 weeks.

Here, Angus Fontaine, a writer, describes the tumult he and his wife of two years, Karen, endured when their son, Noah, arrived nine weeks premature.

For us, the final 63 days of pregnancy – big kicks, baby showers, basketball silhouettes – was zapped down to 63 minutes. It began as Karen’s sob from the bathroom, took in a land-speed record for home-to-hospital shuttling and ended with a doctor’s ultimatum: deliver now or else.

These are the moments in which men give birth. They bite down hard and turn jellied muscle to molten steel. They dam tears, hunt courage and build bridges. They man up. I took a moment, closed my eyes and found my mettle. This was the moment. My dewy vision of fatherhood was now a frantic jungle of wires, needles and nurses. My soundtrack was the trip-hammer beat of my son’s tremulous heart coming home on the red tide. What else can a man do but hold his girl’s hand and hold steady as the storm comes in?

That birth was the start of a tempest that raged 40 days and 40 nights. After Noah was cut from his mother’s belly – less than two kilograms of mewling miracle – the nurses wrapped him in plastic, lit him under heat lamps and wheeled him to what would become our new home, headquarters and base camp: the newborn care centre at the Royal Hospital for Women in Randwick.

Walking into that arena of hope, glory and anguish – all the little babies like skinned rabbits in their humidicribs, their poor parents pressed up against the glass, midwives moving between them like landlocked angels – I realised how lucky we were.

Noah’s little ark was moored in level three of intensive care, where every hour is desperate. But I knew he was fine – small, yes, but perfectly formed. It was his tiny bedfellows who had borne the greater brunt – they were wired up to higher powers, their parents sharing vigil with grave-faced doctors.

They say purgatory is the state between heaven and hell, a place of soul cleansing by fire. I was in it. In those early days, Karen and I could only touch Noah for a few minutes for fear of over-stimulating him. That was hard. But, in a ward of wailing infants and clucking mums, seeing Karen’s arms empty for 23 hours and 45 minutes was worse.

As Noah graduated to level two and we spent more time together, I saw my son for what he was. His little legs still kicked like a sick cricket – but to his father he was a golden-haired god in a size00000 jumpsuit. When he dictated the terms of his release – tearing off his nappy and kicking it to the side – I couldn’t have been more proud.

When we passed out of hospital shadow into sun for the first time and Here Comes The Sun came on the radio I’m not ashamed to say a couple of fat, salty tears broke from me. Fourteen months on, Noah weighs six times what he did at birth and is set to walk. He’s a little man and I’m a giant. We’re a family and every day is a rainbow. 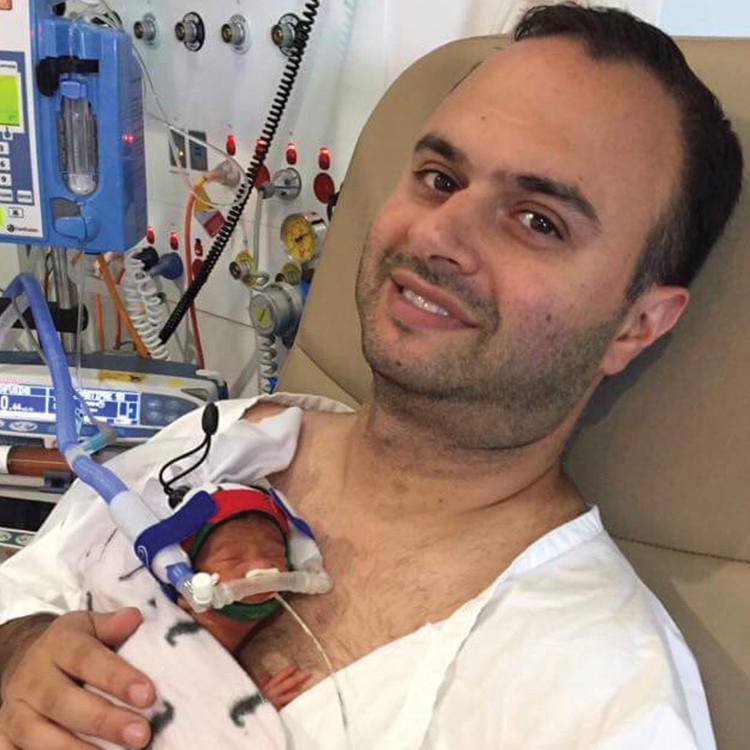